Again, while I am not blogging like mad, here is another presentation on logging. This baby is a big philosophical and mildly inspired by Dan Geer and it looks into connections between logging and broader concept of "accountability," as it is defined in IT and even beyond. I also explore the ideas that "controls don't scale, while monitoring/logging does."

The presentation is also embedded below:

While I am too busy too blog [I will explain why soon!], I wanted to give my readers some fun logging and security stuff to read.

So, I am releasing one of my favorite presentations, the one on log forensics, in its newest expanded form: "Logs for Incident Response and Forensics: Key Issues for GOVCERT.NL 2008"

Here it is also embedded below:

Logs for Incident Response and Forensics: Key Issues for GOVCERT.NL 2008
View SlideShare presentation or Upload your own. (tags: chuvakin response)

Is PCI DSS "Too Prescriptive"?

I did this fun panel on PCI compliance at SecureWorld Bay Area the other week. What is interesting is that almost every time there is a discussion about PCI DSS, somebody crawls out of the woodwork and utters the following: "PCI is too prescriptive!", as if it is a bad thing (e.g. I mentioned it before here)

I used to react to this with "Are you stupid?! PCI being prescriptive is the best thing since sliced cake :-) Finally, there is some specific guidance for people to follow and be more secure!" BTW, in many cases end users who have to comply with PCI DSS still think it is "too fuzzy" and "not specific enough" (e.g. see "MUST-DO Logging for PCI"); and they basically ask for  "a compliance TODO list." (also see this and especially this on compliance checklists)

But every time it happens, I can't stop but think - why do people even utter such utter heresy? :-) And you know what?  I think I got it!

When people say "PCI is too prescriptive," they actually mean that it engenders "checklist mentality" and leads to following the letter of the mandate blindly, without thinking about WHY it was put in place (to protect cardholder data, share risk/responsibility, etc). For example, it says "use a firewall" and so they deploy a shiny firewall with a simple "ALLOW ALL<->ALL" rule (an obvious exaggeration - but you get the point!) Or they have a firewall with a default password unchanged... In addition, the proponents of "PCI is too prescriptive" tend to think that fuzzier guidance (and, especially, prescribing the desired end state AND not the tools to be installed) will lead to people actually thinking about the best way to do it.

So the choices are:

Take your poison now?! Isn't compliance fun? What is the practical solution to this? I personally would take the pill #1 over pill #2 (and that is why I like PCI that much), but with some pause to think, for sure.  I think organizations with less mature security programs will benefit at least a bit from #1, while those with more mature programs might "enjoy" #2 more...

BTW, this post was originally called "Isn't Compliance Fun?!"  I had a few fierce debates with some friends and all of them  piled on me to convince me that "compliance is boring, while security is fun!" The above does illustrate that there are worthy and exciting intellectual challenges in the domain of regulatory compliance. It is not [only] a domain of minimalists (who just "want the auditor to go away") and mediocrity, as some think. What makes security fun - the people aspect, the ever-changing threat landscape, cool technology, high uncertainty, even risk - also apply to compliance ...

Dumb Luck IS a Strategy!

While still at GOVCERT.NL, I've attended a fun little presentation, describing a penetration test (I cannot provide any more details as it was a "No Press" presentation - this post is not about it, but rather was inspired by it!)

In any case, if you do pentests, think about all the RECENT cases where you break in to a major corporation through:

Indeed, many of my pentesting friends still report plenty of such cases (one was also featured in the presentation mentioned above). Whenever I hear about it from a pentester, I always ask:

Do you think "somebody bad" had already passed through the hole you just discovered?

I cannot see how the answer can be "no."

Even though pentesters usually don't focus on forensics (no time for this), it is not uncommon to notice "your predecessor's" intrusion traces while you break through systems, "plant flags", change screen backgrounds [for the admins to notice that you've been there...], etc.

Let's think what this situation really means? Here are the choices I see:

What does this teach us about RISK? The lesson here is important:

This is exactly why I think that the most critical problem in security today is METRICS. Metrics that a) work AND mean something to decision makers and b) can be clearly communicated to said decision makers [BTW, a) and b) are two separate problems.] Metrics that cover not only threats and vulnerabilities we face, but also the effectiveness of security countermeasures we deploy. Metrics you can act on - and ones your boss (and his boss) will act on. Metrics that lead to correct decisions about which risks to accept, which to  mitigate (all while knowing with what efficiency such mitigation occurs) and which to transfer.

Until that time, the dreaded "C-word" (compliance) will trump "the other C-word" (common sense) as a driver for security ... and we will continue to live in the "0wned world."

One More Thing About GOVCERT.NL 2008

I am [well, I was :-) when I create it] flying back from GOVCERT.NL 2008 and lemme tell you! I have not ever seen a security conference which were THAT well-organized. Really! Everything just worked. Keynotes (first, second) were - gasp! - fun and useful (take that, RSA! :-))

My presentation was "Logging for Incident Response and Forensics: Key Issues" and I promise to post it online (here). BTW, if you attended the presentation, feel free to send the questions direct to me (since I didn't have time to answer them all at the end)
at 12:07 AM

The next presentation at GOVCERT.NL 2008 is Marchus Sachs's "Security in Supply Chain"; very interesting as well.

If the world weren't already 0wned due to bad software (see my account of the previous presentation), Marchus talks about how "0wning your supplier to 0wn you" will become more popular. Infected disk drives, picture frames, GPS units (!), laptops, USB keys, MP3 players, etc are a sign of it; the public one, that is. Real "pre-0wned" stuff is the stuff you never see ALL THE WHILE it gets incorporated into our critical systems (like the fake Cisco routers - this one somehow sounds very ominous to me...)

BTW, the one I have not heard is one about Apple iPods being shipped infected with Windows-based malware :-) WTH?

I also love his example of a chewing gum AND a USB stick lying on the floor.
Will you pick a stick of gum and stick it in your mouth? Ewwwgh...
How about a USB stick? Hmm...

So, will RBN (or its tomorrow's equivalent) go into a business of partnering with a fake MP3 player manufacturer AND produce players "pre-0wned" with custom malware? Just an idea ... "RBN-branded MP3 player" to make money two ways.

So, David Rice of "Geekonomics" fame is speaking; the content is pretty much the same as the book, but he sure can speak! :-) [see my review of the book here]

The message is the same: cybercrime is due to bad software; market motivates people to create bad software ("don't worry - be crappy" idea); market will fail to create secure software, etc.

So, how to you make insecure software MORE expensive to create than secure software? Laws? Insurance? What else will help? Only time will tell...
at 12:40 AM

I am amazed (no, AMAZED!) about how many people now write about logs; it is definitely not "the original logging evangelist" anymore :-) Here is a bunch of good log-related reading, useful for those struggling with logs (aka "everybody" :-))

As you well know, I am speaking at GOVCERT.NL Symposium 2008 tomorrow. My talk is "Logging for Incident Response and Forensics: Key Issues," an attempt to squeeze A LOT of knowledge into 45 minutes :-)

Another day, another security ROI blogwar.

Overall, I love it when educated peoples' debate just falls waaaay down to the level of "I won't care what YOU call it as long as you don't care what I call it...." Yuck! :-)

If This Isn't 'Semantic Hacking', I Don't Know What Is...

"Shares of UAL Corp. went from $12.16 to $0.01 [A.C. - the number is actually not true; they dropped to about $3, but still] when a 2002 Chicago Tribune article with the headline “United Files For Bankruptcy” appeared today. With today’s date." (more coverage)

This is the analysis of my last poll; the responses are here and also below. 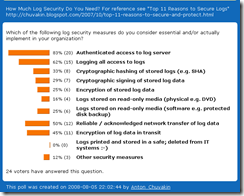 First, the most obvious conclusion: people still don't care much about log security; I am saying that since this was BY FAR the least popular of my polls. Only 24 people responded, so everything below is pretty unscientific :-)  A good way to explain it: look at the recent media? Do these people care about their key business data and their customer data security? Nope. So, how on Earth do you make them care about securing their log data?

However, this is where the buck stops: other security measures are notably less popular.

Third, "Logging all access to logs" is my favorite and I am happy to see it reported as popular. But do you really do it?  Do you log access to log server OR access to actual logs? Think about it... I think a lot of people who do the latter still answered "yes" to this one.

Fourth,  "Reliable / acknowledged network transfer of log data" and "Encryption of log data in transit " are two true "no-brainer" security features; they took the next spot at 45% and 50% of those who answered. They are simple, they are easy, they make  sense - and, obviously, they don't make logs entirely secure so you need to do more. Why only 50%? Where is THE OTHER 50%?!

Finally, I am embarrassed to say that I missed  the obvious security measure "Separate server for logging, not accessible from the Internet;" one of my readers added this using "Other security measures" choice. Indeed, this is a good point - and a good idea to do it. Another option mention there was "Destroy old logs." Amen to that too!

I saw this idea of a monthly blog round-up and I liked it. In general, blogs are a bit "stateless" and a lot of good content gets lost since many people, sadly, only pay attention to what they see today. This is an attempt to remind people of useful content!

So, here is my next monthly "Security Warrior" blog round-up of top 5 popular posts and topics.

What CAN You Do?

Alan is not the only one who got 0wned. I am hearing VERY disturbing rumors from some other people (sorry, can't share them here) - and they are good, paranoid people :-) People who don't have a password of "password." :-)

What can you, personally, do today if you know - or, at least, suspect - that somebody is after you?

Change all passwords? Create paper copies of financial records? Backup everything offline? What else?

Maybe it will become a new blog meme... In any case, I AM thinking about it. Today!

And I suggest you do that too.

UPDATE: a very good follow-up post to this with a lot of practical suggestion. Go there!
at 12:36 PM