This is a follow-up to this ("On Doomsaying (Terry Childs case)") and this ("So ... Am I? Maybe I Am!"), both related to Terry Child case, as well as a response to this post  by Paul Venezia ("The anti-admin stance and the Childs case").
First, let me disclose something - my frantic efforts with the Paint allow me to proudly proclaim: I am a certified, trusted "Good Guy": 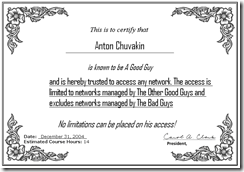 Good guys, let me tell you, do not need any controls placed on them; they are "trusted." Don't you have to trust somebody? Why not trust a sysadmin, for example?
So, what about controls? Ah, glad that you asked! "Controls" are for the bad guys; they are in place to prevent the bad guys from doing "an unspeakable evil" (tm) :-) on you. On the other hand, good guys are doing "the right thing" every time - why monitor them? It goes without saying that nobody ever moves between these groups, especially, not from "good guys" to "bad guys."
As I am rambling about this, many of my security-minded readers are wondering "what is Anton up to? Isn't it kind of OBVIOUS that controls are for everybody?" Controls know no good/bad! For example, a network control, say a NIPS, will block malicious web access due to a typo in a URL (by - gasp! - a good guy) or due to determined malicious hacking.
I think a few of my readers have watched one too many "Batman" movies and have acquired the dark side of the "IT hero" mentality." How about getting an "IT employee" mentality? If your boss is an idiot (and Terry's managers definitely seem pretty far gone in that direction...), than your "heroic duty" is to let them impale themselves on a sword of their idiocy, not to commit crimes (even if cybercrimes) to prevent that idiocy. Really, go find another job if you do not like the environment; good admins are needed in many places. For example, if your boss insists on posting all VPN passwords for all users publicly out of his sheer and unfathomable stupidity, it is your duty to tell him that it is "a very bad idea" - and not to change all passwords and not let him see it. "Doing you job" despite your boss and despite the law just doesn't work...
In other words, I want a banker making policy decisions at a bank, not a sysadmin. If a banker makes a wrong decision, his will suffer. If he is an idiot, he will most likely make the wrong decision. However, it is NOT the admin's decision to make - he does not "own" the business.  BTW, the fact that it is a city, not a bank, and it is taxpayer funded, does not change it.
Am I "anti-admin" for saying that admins should not run the business?  Am I "anti-admin" for saying controls (at least logging/auditing) on administrator activities are needed?  You call it "anti-admin", I call it common sense!!  Pray tell me, what makes admins float above accountability, control and  IT governance?
Please also read what Randy Smith said about this issue; a lot of good thoughts that I agree with.
Now I would like to respond to specific comments from my readers:


"What rankles your readers is how blithely you imply this problem has a simple or effective solution. It doesn't, all the processes or tools you advocate can do is speed up the time it takes to detect the lock-out, but not actually prevent it - i.e. they are ineffective at tackling the primary problem."

That is correct; the rogue admin problem has NO simple solution. You might prevent some (few, really) things, you might log some of them and then figure what happened, but there is no simple solution (it goes without saying that "just trust them" is NOT a solution...)


"We all know companies run without sane risk management all the time and are rarely held accountable in America. What makes you think anyone is "screwed"?"

Well, this is a good point; maybe I let my idealistic side take over. But, come on, just the fact that bad IT governance is somewhat common, doesn't make it right!


"Now ask yourself who is "screwed" by one person at a small company having all access and no accountability on a network. That's how I run my home network. Big deal."

Nobody is. I addressed it here. The risk is acceptable for smaller environments, usually. I don't have an overseeing body set up to control my home passwords :-)


"You seem to forget that sometimes the management just has to trust somebody. "


"Chuvakin, you're a tool. Given the recent idiocy of the releasing of the VPN names and codes, it obviously shows that any sort of detest that Childs had against his superiors at the city were justified."

The fact that his bosses are idiots (which seems fairly well established!) does not make him right!
Bad boss + admin out of control =/= right :-)


"This is not a private organization. His superiors don't own the company and are NOT entitled to the data. We are, the taxpayers. And as a California taxpayer I fully support someone with the paranoia and technical skill of Terry Childs over a group of bureaucrats who release secure information to the public."

Properly evaluating this statement requires a law degree. Thus, no comment. Bureaucrats suck, but rogue admins are not a solution to that. Really!


"The guy was doing his job and doing it incredibly well, and keeping it out of the hands of those who, given their most recent choices, would bring potential disaster to the city."

He was NOT, unless crime is part of his job :-) Also, see comments on "IT heroes" above. If your boss is an idiot AND you don't like it, quit.


"Anton Chuvakin seems to think that all admins should be kept underneath management's boot at all times. [...]  Managers can't and don't understand what we do, and thus eventually come to the conclusion that we can't be trusted with our own knowledge. [...] Perhaps it's human nature to fear what you don't know or understand -- and that's why management can develop a fear of their own employees."

You say 'fear of employees', I say "insider risk management." You say "trust employees", I say "trust but [be able to] verify (=log)"


"his blog leads the casual reader to infer that their businesses are in danger of being hijacked by disgruntled Sys Admins and that isn’t the case." (from here)


"I despise people like Terry Childs, but despise Chicken Little’s like Anton Chuvakin even more." (from here)

You say  I am 'chicken little', I say "if your boss ignores insider risk management, he is stupid and deserves his business to fail."  I also add "if you think admins are 'above the law', you have a good chance of 'turning rogue' yourself AND then ending in jail."
Finally, this and my other posts about the case are inspired by on the media reporting; I possess no "insider knowledge" on this case  whatsoever.