How impossible is it to predict anything in the field of information security? 10 years? Into the future?  Still the purpose of this endeavor is not necessarily to “have everything right”, but to have fun in the process and to get people to think beyond the immediate tactical horizon in information security.

Let's start from the overriding trend that will define the rest of the discussion: 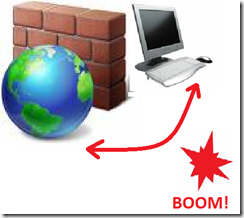 That trend is that the walls between the computer world (aka the Internet, cyber-anything, online, virtual, cloud, etc) and the “real” world (aka meatspace, Earth, “outside”, “reality”, offline, etc) will break down beyond a certain interesting point, both on the perceptual level and in reality. With – duh! – huge implications to our profession and practice of information security.

What do I mean by this?

Whether perception is reality on not, studies I’ve seen (examples, more, more, more) point that most people behave differently in an online world and in the so-called “real” world. People can also point at many factual differences between online world (that happens inside the human created medium – networked devices) and the outside. I believe that this difference explains at least some of the current information security problems – on some deep level people just don’t see computer intrusions and other issues as “real enough” for them.  Even the simple fact that we have “crime” and “cybercrime,” points that this difference.

So here is the punch line: I think that in the next 10 years these two worlds will be much closer to each other, in both perception and “real” reality. HUGE implications to information security will result.

Where's the evidence? Here are all the things that I bundle in that “ultimate convergence”

All of the above will make information security and computer security (as well as a dying art of network security) PAINFULLY more relevant for people’s lives. If an attacker from a remote location can crash the computer and steal your data, this is bad. If that same attacker can impact what you perceive to be your “real world,” the game changes. And change it will - probably even before 2020. What will stand between such attacker and others? That’d be you and me, my dear reader :-)

The above convergence will also be combined with these “side trends”, all with big impact to security:

So, I don’t know what features your log management system will have in 2020 or what the label “firewall” will mean in 2020, but I know is that it'll matter much, much more than now. Despite all the harping about information being “critical for business”, we only protect information today.  Sorry for a bit of grandstanding here, but we will literally protect the world in 2020…