Lately, something made me think of using log management WITH security information and event management (SIEM) - I suspect it was either this or maybe this zombie here. I did spent some time in my career building SIEM tools and then spent some building log management. Nowadays, their “separate identities” are pretty much widely accepted; even “Big G” combines them in the same document, but calls them out by name separately (this, BTW, took about 2 years of fierce arguments back in 2005-2007 :-))

In any case, my recent bout of thinking revealed four scenarios, crudely depicted on the image to the right: 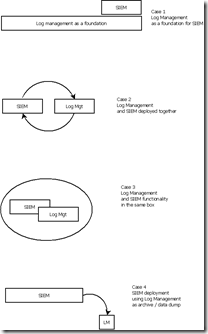 Obviously, it goes without saying there are lots of “log management only” (still growing) situations and some “SIEM only” (likely shrinking) deployment scenarios. But their are not the subject of today’s note here.

BTW, today is my birthday :-) … and I am writing about SIEM. How cool is that?